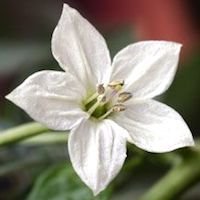 The Capsicum Annuum is a Species of plants of the Genus Capsicum, from which both Bell Peppers and Chillies are obtained. It is the most cultivated in the world among the five main species of the genus Capsicum. In addition to many Cultivars, it also includes the Capsicum Annuum var. Aviculare, that is, the mythical Chiltepin, considered by many to be the closest wild subspecies to the common ancestor of all species, which evolved between Brazil and Bolivia.

By the time the Spaniards arrived in Mexico, the Aztecs had developed dozens of varieties of Capsicum Annuum, according to historian Bernardino de Sahagún who lived around 1529.

Capsicum Annuum is a shrub with an erect bearing, has lanceolate, green leaves, there may be a down on the stem and upper page of the leaves. The flowers, white, single, with yellow / green stamens, with 5 - 7 petals, appear at the axil of the leaves, one per node, in summer. The fruit is a green capsule at the beginning, with colors of the ripe fruit from white to purple, passing through the various shades of yellow, orange and red. The shape is also very variable: from the tiny Chiltepin, to the Sweet Peppers, to the twisted phallic shaped Peter Pepper Red. Personally I think that the best and tastiest Capsicum Annuum are the legendary Diavolicchio Calabrese / Little Devil Calabrese and Acrata el Viagra Natural / Goat's Weed, while the most beautiful is certainly the very long Thunder Mountain Longhorn.

Here is the List of Chili and Bell Pepper Capsicum Annuum Seeds: